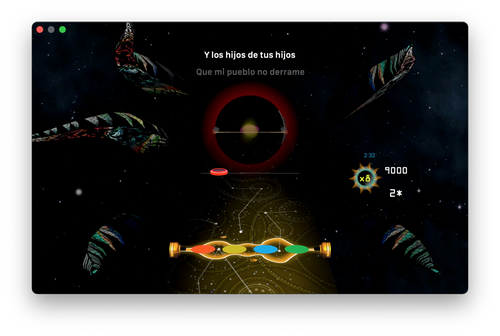 I fixed an annoying bug in lyrics - I was displaying "***" for when the singer is iddle, but some songs had iddle tags even when the singer was, well, singing. So it would cause very rapid animation changes and sometimes the wrong lyrics would display. I removed the "***", and also updated the animations so there is no overlaps or funky animations

In other fixes, in very edges cases, when missing a note right before a Star Power(SP) run, SP triggers would appear. Sometimes doubling up with other notes. This had a pretty jarring effect.

Also changed the score checking method. Before if you hit a trigger during a note break right before an SP run, it would invalidate the run even tho it hadn't technically started. Now the run is only invalidated after the first note in the run is in the hit window. This is an actual game changer since it can affect the score. I never caught it before because it required a specific mistake I usually don't make.

Basically to test this game I not only how to play Perfect play throughs but also I need to screw up in very particular places. Lord knows how many more fixes are out there. But if you play perfect, there should be no issues :P

Cosmetic updates - new textures for the note highway. Overall they are higher resolution, but also the Star Power mode has a new paisley design

New random song by artist - When in the score display you can hit blue tom to play a random song from the same artist. If there is only 1 song from that artist the previous song will replay. This has become very useful I will be expanding on this feature.